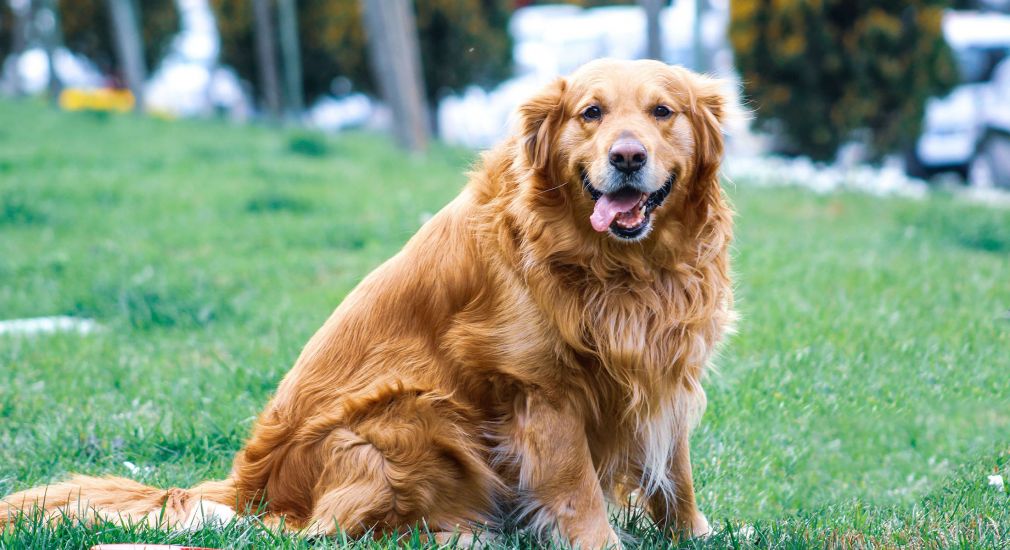 How your dog’s waddle walk is an early indication of problems to come, and how to avoid them!

Just like many of us, some dogs tend to pile on the pounds if their diet is left unchecked. Perhaps you have noticed your dog has a waddle or shuffling walk and maybe even thought it was cute?

An increase in body weight can lead to a snowball effect with long-term consequences to the movement and well-being of your pet. Thankfully, it is never too late to take action to reduce these issues, which we will discuss a bit later. But first, let’s understand the problem in detail.

How does obesity/excess body fat negatively affect the natural movement of dogs?

When we compare how lean normal dogs walk with their overweight buddies, we see four big differences in their movement which impact the ability and mobility in dogs which carry excess body fat. They are explained here:

1. There is a shorter distance between steps (Stride length) in obese dogs.

This shorted step happens in both the front and back legs of an overweight dog as they walk. A whopping 8% shorter stride length. Overweight and obese dogs are unable to optimise their walking motion, making them shuffle (or waddle) along in short steps with more difficulty and less efficient than their lean friends.  These short steps happen because of the body’s adaptive mechanism to protect the joints when there is a heavier load and in turn reduce the angle of the stride which is the angle between the two back legs (or front legs), making them inefficient movers. 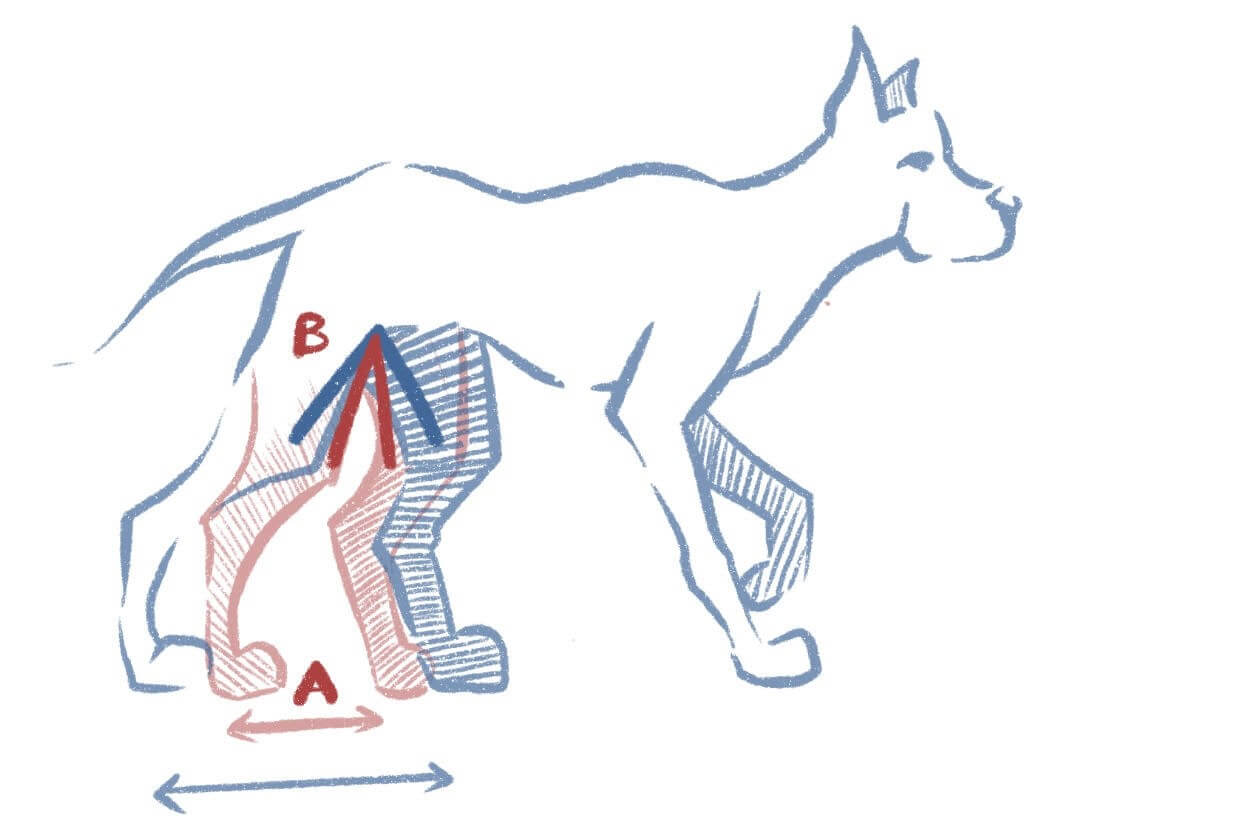 The shorter stride length (A) reduces the angle of the stride (B) shown here as the angle between the two back legs.  Blue= lean dog, Red= obese dog

When an obese dog is walking or trotting, there is greater force bearing down on the leg touching the ground, and this forces a greater angle (flexion) or bend in the joints, making the joints less stable. Think of it this way…….as a human, we stand on just two legs, which is obviously different to dogs, but imagine standing with a 15kg bag of rice over your shoulders and you are asked to walk. With the heavier load, your knees are likely to bend more as you walk, as they take the force of the greater weight. Unfortunately, for the dog, it’s the elbow and the hip which suffer with less stability and strength in BOTH the swing (moving leg) phase and the stance (weight bearing) phase of walking motion. The elbow and hip are the two joints which are commonly affected with ‘dysplasia’ (abnormal joint structure) in the dog and later go on to develop osteoarthritis (degenerative joint disease).

You probably already guessed it…….Heavier weight results in more force pushing down to the ground through the dog’s leg. There is up to 25% more force passing through the joint in an obese dog than in a lean dog. And greater force through the joints into the ground means greater compressive forces within the joints and more stress on the joint surface and structures which includes the cartilage and bone. This overworking of the joint with abnormal forces in turn will affect the rate of osteoarthritis development and progression. 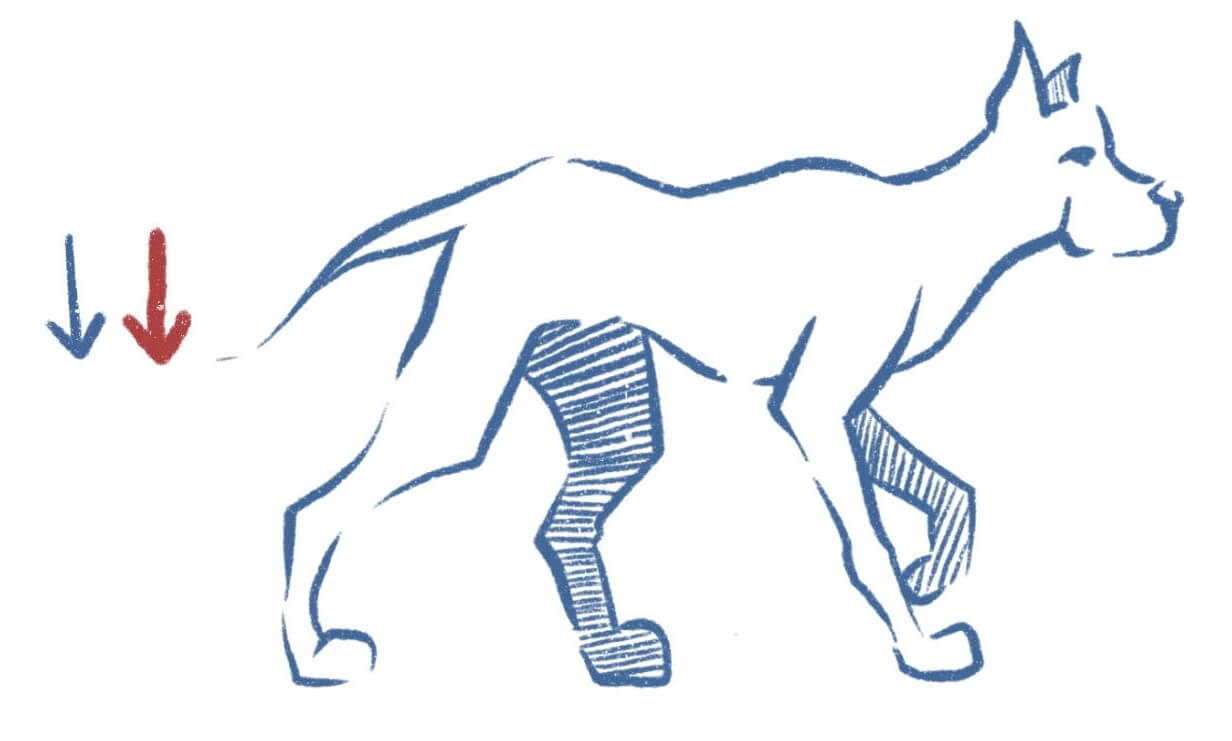 The increase in body weight increases the compressive forces that pass through the joints to the ground. Blue= lean dog, Red= obese dog

4. Unnatural spine movement also occurs with excess body weight because some of the extra weight hangs downward off the supporting spine, around the belly. Between each of the vertebrae bones which make up the spine, and protect the spinal cord, there are many little tiny joints called facet joints. These little facet joints can also suffer from osteoarthritis causing back pain- the more weight, the more pain.

Obese and overweight dogs are at high risk of diabetes, heart disease, breathing problems and joint problems (among other risks). At Paws in Motion, our big worry is the snowball effect we see with joint problems and obesity. The heavier the dog, the faster the joint problems progress. In turn, reduced mobility or movement, results in greater chance of obesity! But there is something we can do about it! 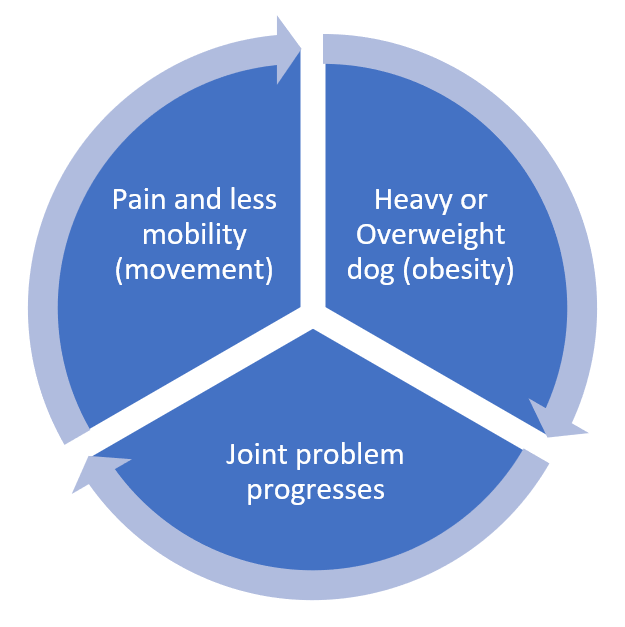 The snowball effect of the impact of obesity on joint disease progression.

Reducing the risk and severity of joint problems

Just as little as 6-8% body weight reduction has a direct influence on reducing lameness in dogs with osteoarthritis. Weight loss in overweight cats and dogs is now seen as one of the most important factors in helping pets with OA to decrease pain and improve joint mobility.

The first step to better weight management to evaluate your pets body condition.  In human healthcare, they often refer to the Body Mass Index (BMI), which is a calculation to estimate body fat based on the human’s height and weight. There are also other measurements including skin fold thickness and scanners to estimate body fat percentage.

But dogs come in many different breeds and sizes, so instead, we use Body Condition Score (BCS) charts which are based on feeling (palpation) the fat level over the ribs and a visual assessment. It is scored from 1 to 9 on a scale of 9. Where 1/9 is extremely thin, 5/9 is ideal, 7/9 is overweight and scores of 8/9 or 9/9 are considered obese. There are various charts available for small, medium, large and giant breeds. 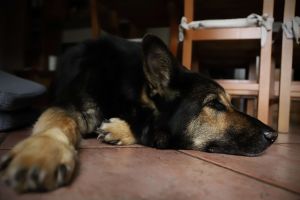 Tips: Senior pets and pressure sores- bedding advice Similar to humans, dogs may develop pressure sores if they lie on their bed or floor for long periods of time, if their mobility is reduced. Pressure sores often develop over bony prominences (the bony points with very thin skin and little fat covering) such as the hips and elbows causing damage to the skin barrier and discomfort.
Read More 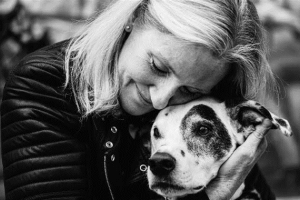 Dr Jane joins the prestigious new VSMR chapter of ANZCVS We are delighted to update you that Dr Jane McNae has been invited to join and the newly established Veterinary Sports Medicine and Rehabilitation chapter of the Australian & New Zealand College of Veterinary Scientists.
Read More